How Self-Driving Cars will Impact the Price of Your Home

A few months ago, I wrote about smart roads being built in Kansas. Last week, we looked at two Canadian tech companies that are creating ways to reduce energy bills and save money for homeowners. It may seem odd to cover technology on a real estate blog, but as we shift towards a technology-driven future, the distinction between the two is beginning to blur.

When cars were first mass-produced and commercialized, the result was urban sprawl; the habitation of lesser populated areas that we called the suburbs. Cars made it possible to sleep and eat in one place, and work somewhere else. Suddenly, it made sense to live tens of kilometers away from the nearest grocery store or elementary school.

As we inch towards the reality of self-driving cars, it’s worth investigating the effect they will have on the way we live. We know that real estate costs much more when it’s located close to public transit and city centres – exponentially more. Even though it’s possible to commute from beyond the city limits to downtown, there’s no denying those hours would be better spent with loved ones, squeezing in a workout, or simply relaxing.

Self-driving cars will transform the experience of an hour-long commute from frustrating to fun; we’ll catch up on beauty sleep, meditation, FaceTime, or even get to work earlier. Autonomous cars will make commutes more tolerable, and decrease the cost of housing in what are currently convenient (and premium) locations.

99mph is an American company using big data to quantify just how disruptive the arrival of self-driving cars will be on home prices in US metropoles. Their conservative prediction is in the realm of a 1 trillion dollar shift from properties with a convenience premium to those with an inconvenience penalty.

The table below illustrates the U.S. cities that will be impacted the most: 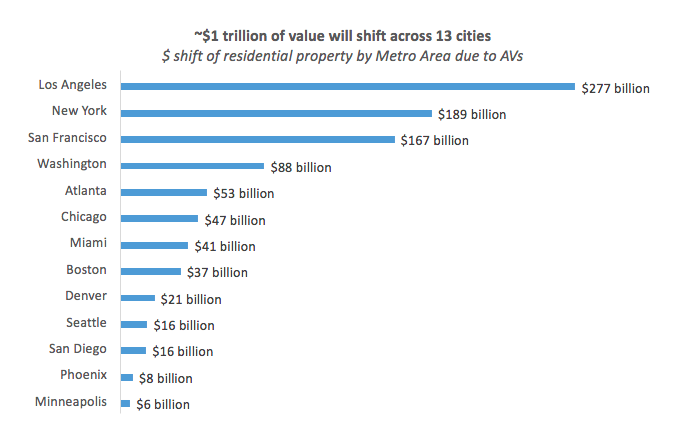 Single-metropolis, or monocentric cities like LA or New York are expecting the biggest shift from convenience properties to those with an inconvenience penalty. Minneapolis and Phoenix, which are poly-centric cities, do not put the same premium on location, and therefore will experience less of a shift.

Canada shouldn’t expect a shift of the same magnitude, there are simply fewer people and less money invested in Canadian real estate than in the U.S.. But relative to other Canadian cities, Toronto would appear to be near the top of the chart. We can expect to see a housing shift from Toronto-proper to markets such as Milton, Burlington, Stoney Creek, Barrie, Collingwood, Markham, and Pickering.

Self-driving cars aren’t quite ready for prime time, but they will certainly impact real estate values and buying decisions. The pace of innovation is not slowing down. I’m sure technology will continue to influence our daily lives; self-driving cars are just the beginning. What do you think is next?